-For the weapons of our warfare are not physical [weapons of flesh and blood], but they are mighty before God for the overthrow and destruction of strongholds,-
(2 Corinthians 10:4) 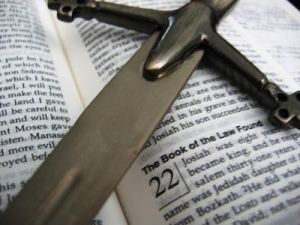 As I was reading through 1 Samuel chapter 17 this morning, I was particularly taken in by verses 49-51. It just reminds me again that the weapons of our warfare are not physical, but spiritual!! When we use God’s word against our enemies, we are able to slay our dragons…and just like Goliath,…The Bigger they are, the Harder they Fall!!

So often when We have heard the story of how David defeated the giant Goliath, We have been lead to believe that David killed Goliath with only a slingshot and a stone, but when We read verse 49, scripture tells Us that after that stone sank into Goliath’s forehead, Goliath just fell on his face….verse 51 goes on to tell Us that Goliath was not killed until David drew the sword to cut off his head…

So what does that mean to You?

Well, again we must realize that, contrary to what most of Us have been taught, Goliath was not slain by a stone…but he was slain by the sword, i. e. the Sword of the Spirit, which is the Word of God.

Remember is verse 23, When that arrogant Goliath made his daily debut, he would come out before the Philistine armies everyday, ‘talking trash’ and spiritually intimidating the Israelite armies. Verse 24 tells Us that the men of Israel were terrified at Goliath’s approach and they fled from him.

There was not one spiritual giant in the Israelite army that had the courage and boldness to talk back to this oversized devil, except for David.

Now David knew God and he knew God’s Word and although he had come, armed for battle with sling and stone, he first came prophesying…and speaking out against Goliath with the Words that could have only come from the Spirit of the Lord that was upon him.

In Verse 45, David says, “I come to you in the name of the Lord of hosts, the God of the ranks of Israel, Whom you have defied. This day the Lord will deliver you into my hand, and I will smite you and cut off your head.

I can hear David now, “Ok Goliath! Whenever you get done talking Trash, I’m gonna cut you down today with my handy dandy slingshot, in the Name of the God of Israel…then I’m gonna put that big head of yours on a platter!!

So David aimed for Goliath’s forehead and took him down with the stone, but it was the Sword that caused the fatal blow to Goliath. David Cut Goliath down with God’s Words!!

So when those oversized demons come against you ‘talking trash,’ reminding You of Your past transgressions, replaying painful defeats, and stirring up old wounds…Just CUT him!!

CUT him down with the Word of God!!

And as You take the time to read 1 Samuel Chapter 17, notice that scripture goes on to tell Us in verse 51 that after the backup soldiers of the Philistine armies saw that the mighty Goliath was defeated, they fled.

So that means…that Not only can You use the Word to CUT off that GIANT demon’s neck, but then…You can also put his little backup demons on the run!!

-So be subject to God. Resist the devil [stand firm against him], and he will flee from you-(James 4:7)

Thanks For Stopping By…Until We Meet Again,

Don’t forget to Be a Blessing… Share The CareBibleStudy Blog with YOUR Family, Friends, Co-Workers, and Your Neighbors – Loving Them As You Love Yourself!!

-We are assured and know that [God being a PARTNER in their labor] ALL things work together and are [fitting into a plan] for GOOD to and for those who love God and are called according to [His] design and purpose.-
(Romans 8:28)

When We read Romans 8:28, We are often ‘Encouraged in the Lord’ by Paul’s writings, but there are other times….trying times…when the enemy is coming against Us with attack upon attack, that We can easily allow a spirit of despair and self-pity to creep in and feed Us a meal of continual doubt and discouragement. We begin to doubt the very thing that We heard God say to Us and satan tries to convince Us that God is no longer on Our side.

We find ourselves walking in unbelief, wondering if God really does have a GOOD plan for Our lives and for Our future, after ALL.

We feel like We are trapped in what seems like an endless period of trials and ALL We can see are calamities and misfortune.

We find Ourselves asking God,
“Why!!” …And asking Him,
“When will I see the GOOD?”

THE GOOD NEWS HAS COME!!

When You accepted Jesus Christ into Your Life, You received The Holy Spirit as Your very own Tag-Team PARTNER against Hell…And He equips You with the ability to discern God’s Word and to Speak it out, BOLDY into Your own life.

So Boldly memorize and meditate on this verse (Romans 8:28)…repeating it over and over…singing it…and yelling it out-loud into the room…praying, fervently that those life-filled words will seep in through your ear canal and flood your mind and penetrate your heart with hope, until You are convinced that God Still Loves You and that He has Never Left You, Nor Forsaken You!

He’s been right there with You, ALL along…in the midst of ALL that You’ve been going through…and God is still Working on Your Side…and He will cause ALL of these things to Work Out…and You Will See The GOOD that He has planned For You!!
Thanks For Stopping By…Until We Meet Again,
God Loves You and So Do I!!

-Tam
Don’t forget to Be a Blessing… Share The CareBibleStudy Blog with YOUR Family, Friends, Co-Workers, and Your Neighbors – Loving Them As You Love Yourself!!

Whatever You Are Going Through- Walk Through It By Faith and Not By Sight!!

-We are troubled on every side, yet not distressed; we are perplexed, but not in despair; Persecuted, but not forsaken; cast down, but not destroyed.
(2 Corinthians 4:8-9)

Take a Read through 2 Corinthians Chapter 4: Paul tells Us that When we go through life’s tribulations; deterioration of the family, divorce and bitter separations, mental and emotional breakdown, financial woes, physical illness and pain, etc., If we will walk through it trusting in and relying on God, then Our suffering is but a temporary, momentary, affliction…and this too, shall pass!!

No- Our troubles aren’t going to cease when we want them to; it’s not our own timing that’s important, but it’s God’s timing.

-But I trusted in thee, O LORD: I said, Thou art my God. My times are in thy hand: deliver me from the hand of mine enemies, and from them that persecute me. (Psalms 31:14-15)

Paul says that this current suffering that we are experiencing, in the natural will produce great gains for Us spiritually and eternally. So although we are experiencing suffering in this fleshly tent, and these bodies that we live in are dying and deteriorating daily, Paul reminds Us that the inner man- the Spirit Man- is being refreshed and renewed daily!!

Paul encourages Us, as he reminds us that although there is trouble all around Us…As we we walk through with God, He will give Us peace…so we’re not stressed-out. When we are confused and perplexed, He gives us His grace (his kindness, mercy and favor)…so we’re not in despair and left without hope. When we’re persecuted and it seems we’re fighting battles on every hand, Praise God we’re not forsaken or defeated because He causes Us to triumph over Our enemies. Even when we are weak in the knees with fear and we fall down…it’s the Truth of God’s written Word the lifts Us up in Spirit…and it is that Spirit…that Holy Spirit that lives inside of Us…Who seals Us with the Guarantee of an Eternal Life with Jesus and keeps Us alive spiritually…so Our enemy can never destroy Us!!

Thanks for Stopping By Neighbor,

Until We meet Again,

Don’t forget to Be a Blessing…
Share The CareBibleStudy Blog with YOUR Family, Friends, Co-Workers and Neighbors –Loving Them As You Love Yourself!!